We are aware that using pointers for passing parameters can avoid data copy, which will benefit the performance. Nevertheless, there are always some edge cases we might need concern.

Let’s take this as an example:

Intuitively, we might consider that vec.addp is faster than vec.addv because its parameter u uses pointer form. There should be no copies of the data, whereas vec.addv involves data copy both when passing and returning.

However, if we do a micro-benchmark:

And run as follows:

The benchstat will give you the following result:

How is this happening?

This is all because of compiler optimization, and mostly because of inlining.

If we disable inline from the addv and addp:

Then run the benchmark and compare the perf with the previous one:

The inline optimization transforms the vec.addv:

to a direct assign statement:

And for the vec.addp’s case:

to a direct manipulation:

If we check the compiled assembly, the reason reveals quickly:

The dumped assumbly code is as follows:

The addv implementation uses values from the previous stack frame and writes the result directly to the return; whereas addp needs MOVQ that copies the parameter to different registers (e.g., copy pointers to AX and CX), then write back when returning. Therefore, with inline disabled, the reason that addv is slower than addp is caused by different memory access pattern.

Can pass by value always faster than pass by pointer? We could do a further test. But this time, we need use a generator to generate all possible cases. Here is how we could do it:

If we generate our test code and perform the same benchmark procedure again:

We could even further try a version that disables inline:

Eventually, we will endup with the following results: 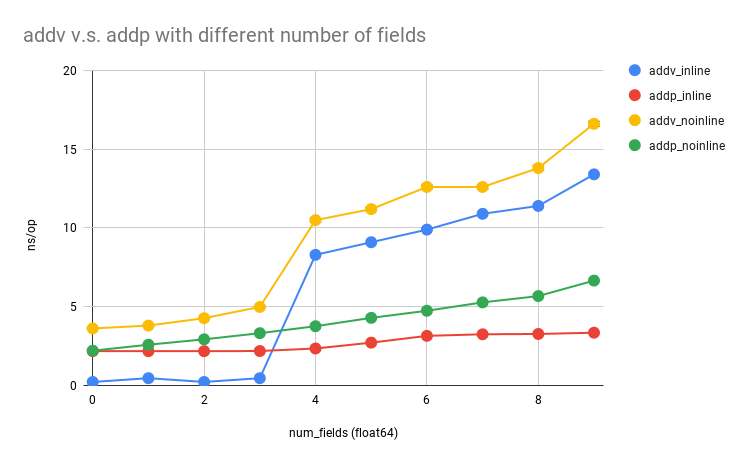 TLDR: The above figure basically demonstrates when should you pass-by-value or pass-by-pointer. If you are certain that your code won’t produce any escape variables, and the size of your argument is smaller than 4*4 = 16 bytes, then you should go for pass-by-value; otherwise, you should keep using pointers.